yep, it's been a while!  but i had a night at the casino with my Smudge-Paw, then a week in Cape May with my darling Lesley from England (during which time i made 88 cards - true story!), and now a day off due to ol' Sandy, and i've been a crafty mama!

speaking of mama, have you seen the trailer for Mama?  oooohhh, i wanna see it!  LOVE the creature horror from Guillermo Del Toro!

okay, so crafty stuff....  first of all, we have a new challenge coming at Some Odd Girl tomorrow, and YOU should play along!  not only have the new releases been uber fun, but in case you didn't already know, there are TWO ways to win, and two separate prizes.  3 digis for the digi lovers out there, and a 4x6 clear set for those who prefer the ol' fashioned way.  join us tomorrow and get in on that action.  :)

and i have a little project feature to share, in hopes of inspiring you even a smidge for that holiday crafting!  i tend to leave mine to the last minute, but i'm happy to say i've got a bunch out of the way already this year!  not only do i lurrrrve the Christmas stamps from Some Odd Girl, but i was thrilled to use up some scraps on this project!  heeeeeeeeere's Ornament Tia (done up with Copics!): 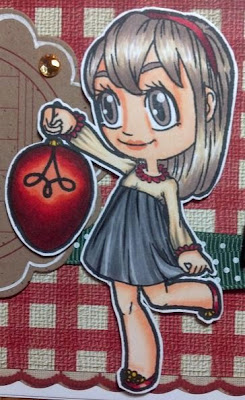 isn't the filament on the bulb FUN?!  well the set gives you four options - you can go plain, filament, or one of two patterns (or you can get crazy and paper piece it!)...  not to mention two different sentiments.  don't you love having OPTIONS?! 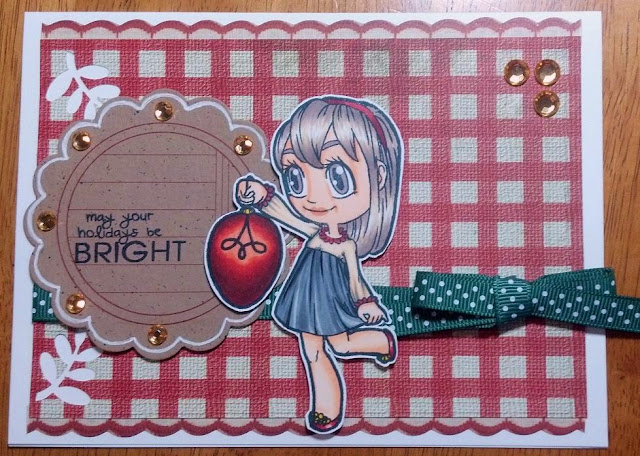 totally simple and not my usual, but Ornament Tia definitely steals the show!

playing along with challenges around the blogosphere....
Daring Cardmakers - their theme is "Let There Be Light"
Polka Doodles - they want a Christmas card with KRAFT added

and that's gonna do it for me for tonight...  i'd love to show you more, but there's too much going on with Designed to Color and Some Odd Girl and i have far too many secret things going on behind the scenes!  i'm just glad that Sandy is behind me and my feral kitties out back survived the storm!  :D

morning, chickens!  hope all's well in your respective necks of the woods!  it's been a bit of a frantic time for me, as i've been burning the candle at both ends, but it all paid off!  i am the new Assistant Manager of the bank where i work, and i couldn't be happier.  the company is amazing and they treat their employees with fairness, respect, and value.  so there's the news - WOOT!  and that, my dears, explains my absence from here lately.  life!  hectic and exciting!  (and, in some cases, very stressful and upsetting, but ya gotta take the bad with the good, right?)

biffy is coming to visit me this weekend, and i got a room comped in Atlantic City, so we'll be having some long-overdue silly and pointless fun (and if i win big, i'll buy you all a cheeseburger!).

today, a new Charisma challenge!  this one's going to be popular, we just know it.  :)  the Charisma Galz are challenging you to show us BADDA BING!!  yep yep.  load it up and show us lots of happy blingy stuff.


for example...  Angel Gwen!  (a new clear stamp set from Some Odd Girl) 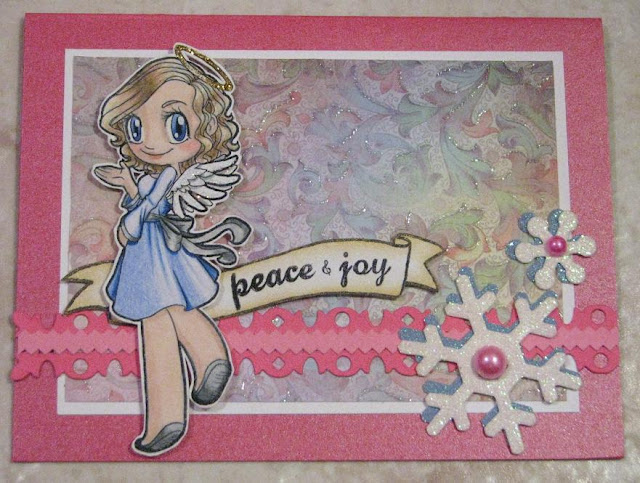 there she is with her blingy little halo, glittery wings, glittery patterned paper, blingy snowflakes and pearlescent cardstock.  isn't she FABULOUS?!  (and i actually don't hate my pleats)

you can grab Angel Gwen by clicking Angel Gwen - she comes with the banner and sentiment you see, too (separately), as well as another sentiment and two little accent shapes.  LOVE her.  seriously.

by entering our Charisma challenge (don't forget - your project has to be NEWLY CREATED, and you must link back to our blog), you could win......

how ya like DEM apples, right?  fabby little prizes!  Charisma challenge and play along by next Wednesday, October 10th for your chance(s) to win!   :)

i'm also playing along with my Gwen card at the following lovely places...