hey there, chickens!  back again on a late Saturday night/early Sunday morning because i can't sleep.  i've been sorting and organizing and purging and when i went through one of my stamp drawers, Unity called to me.  this "written in the clouds" stamp leapt out of the drawer and begged to be used.  on something.  anything.  i HAD to have it, and i love it, but i've never inked the thing up...  until tonight!

card #2 for this month's Unity challenge!  i did the card sketch already, so now i'm using the color combo...

the first thing i did was layer up a piece of vellum and a square of washi over a piece of an upcycled envelope (from a bill!) and stamped the clouds in StazOn (Hydrangea Blue).  i stamped the elephant and sentiment from "could i be any cuter?" on some LilyKate paper from BasicGrey using Memento (London Fog), then doodled a cloud and outlined the elephant with a black Sharpie.  cut them out, cut a couple of green mounds and snipped 'em into grass, pop dotted them up and assembled everything, adding enamel dots and hearts: 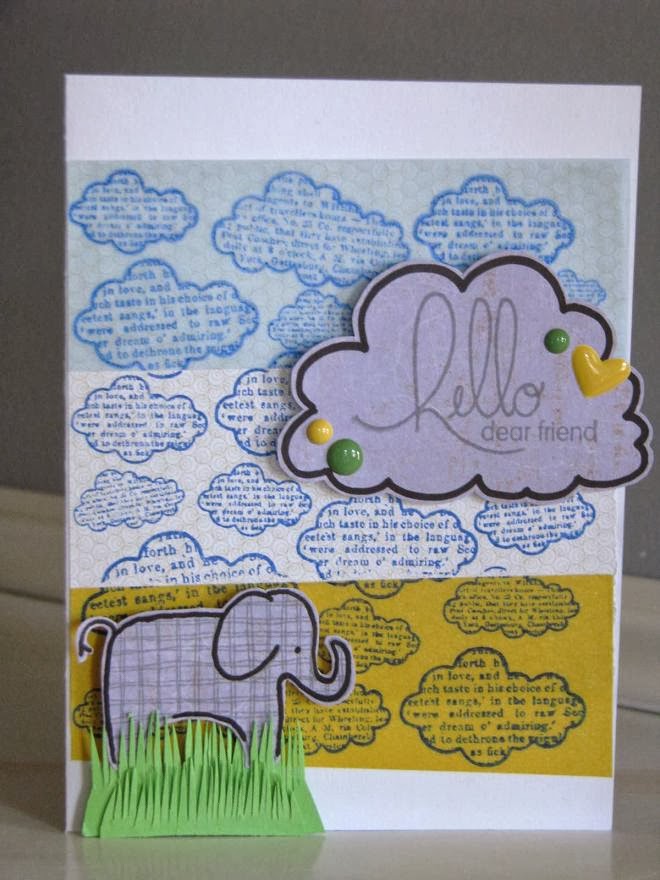 usually i struggle with colour challenges that use more than, say, 3 different colours (i can do it on my own, i just have a really hard time when the colours are pre-determined), but i found this one much easier (despite the periwinkle!)...  there were scraps of everything lying on my table, and they were perfect!  here's the colour palette (one of the three challenge options!): and that's gonna do it for tonight!  trying NOT to stay up too late tonight, since tomorrow i'm at Barre-Fusion in the morning, then i have to shower and get ready for a day on the road with hubbin.  i see some WaWa coffee in my near future!  :D
Posted by Leah l'Orange at 12:34 AM