a merry martini to you! and Simon Says USE BUTTONS!

it was time to do some colouring - i'll go a few days without picking up my beloved Prismacolors, then i'll feel guilty and have to show them some tenderness. after a short dry spell, this morning i decided to bust 'em out, and my Merry Martini card was born: 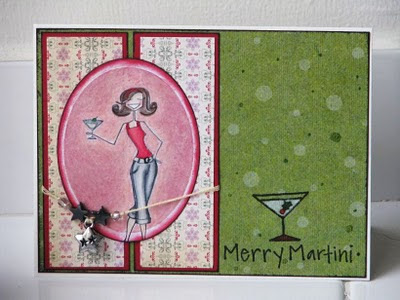 the background was something NEW to me, and also happened because of a big, ugly mistake i'd made. i used Smooch for Bella's hairband, and forgot that the stuff takes FOREVER to dry, so it smudged everywhere! but i'm much happier with the overall card now anyway, so it was a HAPPY accident!

check out the bead/charm action here (i don't often play with stuff like this): 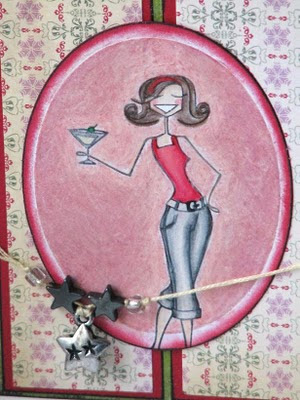 i was partly inspired by the "Just a Fraction" theme last Sunday at 365 Cards (I LOVE THAT BLOG!) - i chopped Bella's feet off to add a spotlight effect
and i'm playing along with the "We Three" challenge at Daring Cardmakers - the three stars

then there's a demand for BUTTONS, and use buttons, i did! i had these two little die-cut trees from a cheapie kit freebie i got last year (it was a bonus with some stuff i'd ordered), and i didn't think i'd EVER use them, because they just weren't my style. then i saw the challenge in the Simon Says Stamp group at Paper Craft Planet, and i finally squoze in a bit of time this morning to put these trees to use.

they wanna see BUTTONS GALORE... and i didn't have very many CAS cards for the craft fair, so it was time. now that i've made these two cards, i think i want to do some others using different colour schemes.

the stars on the treetops? yeah, those are FELT BUTTONS, that i grabbed on clearance at Jo-ann a few months ago. i LOVE them, and it was time to stop hording them. ;)

on a kinda unrelated side note, have you been to the SEI blog? are you a follower there? there's something FUN happening over there in a few of weeks, and i'm really excited! follow them NOW so you don't miss the big event! *giggle*
Posted by Leah l'Orange at 11:58 AM